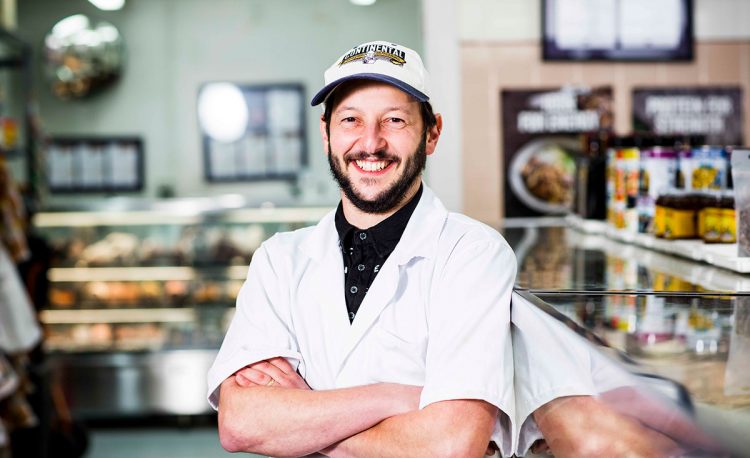 Continental Kosher Butchers was built with the bare hands of survivors, Polish and German immigrants Ber Goldfarb and Heinz Gluecksman in 1945. It has been in Glenferrie Road Malvern since 1972.

Much has changed over the last 70 years but its devotion to quality, tradition, and innovation has made Continental Kosher Butchers one of the few survivors in the kosher meat industry in Australia. In fact, it is the largest producer of kosher red meat and smallgoods in the Southern Hemisphere.

Manager, Daniel Lewis, says there is a unique environment along the Glenferrie Road strip. “I love that the vast majority of the stores in the shopping strip are owned by lovely people. We support them – by buying a bicycle for the proprietor’s son’s birthday; perhaps hand crafted breads, cakes, meat products, green groceries, organic and health foods ….”

When asked for a best selling item in the store, Daniel tells the story of a recent customer who took a phone call while waiting to be served, saying: “I’ll call you back darl, I’m just at the brisket shop”.

Daniel: “Our 14 hour, gently steamed, cured brisket is made from grass-fed beef and has won many awards over the years. Generations of families have grown up, filling their Glicks bagels (available next door) and they’ve trained their grandchildren to do the same.”

The other iconic product is the traditional wood-smoked frankfurt. “There was a time when frankfurts were far from a common occurrence in Australia. They were a gourmet treat served at high-class venues. Ours were on the menu of many such establishments around old Melbourne town. The recipe has not changed since then.”

Nor has the tradition changed that every small child who walks into the store with their “ Bubbeh” or “Zaideh” (grandmother or grandfather) runs to the deli cabinet expectantly hoping for a frankfurt to be handed to them, on the house.

For Daniel and the team, the greatest motivation for hard work is knowing they are contributing to the community’s rich family life, while keeping the kosher tradition alive. “Family values and friendships drive us – and I like to think we are selling memories. The best memories are made amongst your loved ones, with great conversation and good times at the dinner table.” The owners have now been supplying to five generations of families living within a wide radius of Malvern.

The team watches TV cooking shows to address “MasterChef Syndrome”, and there is a fabulous cookbook library with the kitchen trialling new products and recipes to ensure the product range is relevant and exciting.

A new range of products is for sale both at the Glenferrie Road store and in 90 other shops around Australia. Under the label, Lewis & Son, a range of healthy smallgoods with no additives, e numbers or nasties is the first of its kind in the world to be FODMAP Friendly certified, and Gluten Free with endorsement form Coeliac Australia. The range has expanded to include free-range chicken broth and chicken schmaltz as well as an enormous range of Australia’s most creative fermented vegetables. Sauerkrauts, Kimchis, Rockin’ Out Brocco Kraut, and the fabulously named Cauli-Flower-Power are just a few.